Team Psycho Membership Standards:
The Essence of Being Psycho

Team Psycho is an elite triathlon club, considered by many to be one of the more prestigious and competitive teams in the country. Triathletes around the world recognize the Team Psycho brand and associate it with very competitive athletes who relish tough training and hard racing. This community also considers the team to be a great group of people who enjoy social and athletic camaraderie. 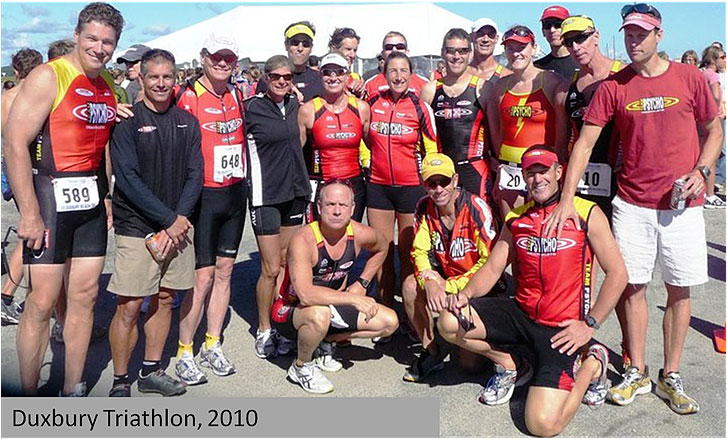 Team Psycho is not a traditional club. With the exception of sponsoring and developing talent in promising young athletes, the team size is kept to a moderate size, but we are always interested in new members who share the interest of doing their personal best. In early 2003, the Team Psycho Board of Directors surveyed existing members to determine the ideal team size. Nearly 80 percent of the team participated in the survey, which concluded that the present team size of approximately 75 members was “just right.” Over 20 percent of the team felt that 75 members was too many, with only one respondent expressing an interest in increasing team size. With this overwhelming response in hand, the Board is challenged to consider the desires of a tight-knit group when considering new membership candidates.

Many people ask what it takes to be a member of Team Psycho. Since its formation, Team Psycho has lived very successfully by an invitation-only membership policy. Yet, this policy is strained by three themes: First, the popularity of Team Psycho and the sport of triathlon; second, the desire of members to retain the “elite brand” that being Psycho represents; and third, the effect upon the brand that may occur with increased team size and evolving membership standards. Thus, it has now become critical to re-iterate and refine the longstanding criteria for new member invitations.

Admission review proceedings take place in November of each year, but the process for applying to be a team member begins 8-12 months beforehand, in the Winter or Spring. All of the criteria outlined below must be met during the triathlon season preceding the November new member review process. Anyone who has not spent the Spring and Summer training with team members, attending key team events and fulfilling other criteria as outlined below will not be considered for membership in that year.

Finally, being a Team Psycho member is not just about results. Many of our members are fast, but not everyone is an elite triathlete. We seek people who strive for personal excellence, someone who tries to be the best that they are capable of being (see Psycho Karma). It is also about participation in many team events throughout the year. It is about being someone who is proud to wear the team uniform and someone who is fun to be around.

Specific Criteria for becoming a member of Team Psycho: