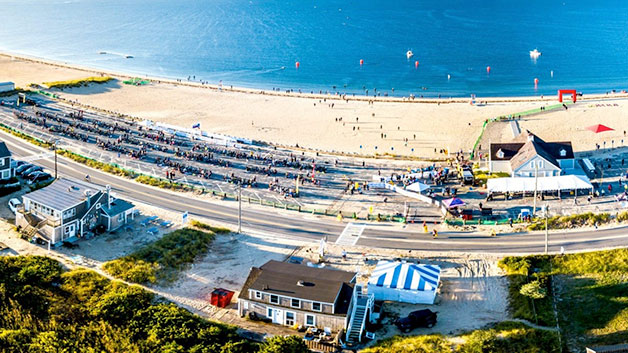 This is Cape Cod’s longest-running triathlon — and one of the oldest races in the world. Recently named as one of the 20 best triathlons in the nation by Men’s Health magazine, the Hyannis 1 sprint race (KEY Team Psycho race) starts and finishes at picturesque, sandy Craigville Beach. It’s challenging — but still able to be completed by fitness enthusiasts who have trained for the distances. The atmosphere is special; the views are spectacular; and your satisfaction of accomplishment will last for a long time!

SWIM: 1/4 mile
A sandy, waist-deep start at Craigville Beach (expect temps in the upper 60s for Hyannis1; mid-70s for Hyannis2). The course is rectangular in shape (approx 150 yards between the two turns). Wave conditions over the years have ranged from glass-calm to a moderate chop; never “big surf” in the protected waters of Nantucket Sound.

BIKE: 10.3 miles
This “rolling hills” course leaves the shores of Craigville to enter into the historic village of Centerville, then winds its way through the villages of Osterville and Wianno before returning along a shoreside road to Craigville Beach. Single loop; and no duplication of any stretch of road!

RUN: 3.6 miles
The athletes head off toward Hyannisport, with a quarter-mile flat run evolving into a gradual climb for a quarter-mile, then a gentle rolling grade until the last mile which is a gentle downhill grade. A water stop is staffed by enthusiastic volunteers at the midpoint of the 3.6-mile run.