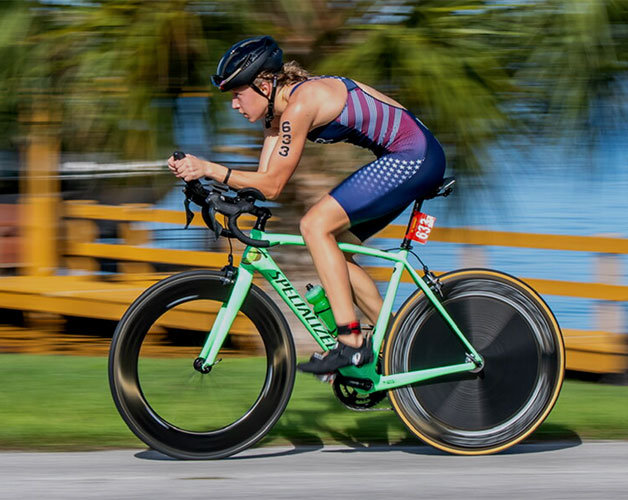 Whether I have been swimming, biking, running, or cheering on family from the sidelines, various aspects of triathlon have been a constant in my life for the last 15 years. I began my competitive career by swimming at the state level from age 6 to age 16 in Indiana. From a young age I loved every minute of competition but did not want to be limited to the water. After watching my brother compete in a middle school track meet I proclaimed that I could beat every runner on the course. My mother rolled her eyes and said that next year when I entered middle school we could see whether it was true. The next year, we did.

The first meet rolled around and I toed the line as a four-foot-something sixth grader in my chunky FILAS sneakers and swimming in a school uniform tied up to prevent it from slipping off. Prior to the race I had begged my mother for a pair of racing spikes like those I had seen on the Olympic runners just months prior. She informed me that they weren’t necessary for a girl who had never run a meet in her life. As a regular Half Ironman competitor, she knew that grit mattered more than gear. She mentioned, though, that she’d consider getting me a pair if I won a race. My goal was already set on victory. The hours I had spent poring over videos of the pros felt like a wealth of secret knowledge. Out to prove to my mom that I was worthy of the elusive racing spikes, I shot off the line and never looked back. I emerged from the woods as I made the final turn on the 3k course and my mom was awestruck. Crossing the line of my debut race with a beaming smile, I promptly asked if we could head to the local running store. Needless to say, running has been a sport for which my fiery passion has yet to fade, despite the fact that these days I don’t stride off in those original neon green size 6 Puma spikes.

I split my middle- and early high-school years between running and swimming. With a passion for both and a love for competition, I found it heartbreaking when my swim coach sat me down and told me that in order to truly excel in one, I’d have to make a choice and streamline my efforts. As a 16-year-old I made the choice that would define my athletic journey for nearly a decade to follow. I chose to run.

Junior year of high school I saw the fruits of my focus, cutting 27 seconds to reach a 5:07 in the 1600m, clocking a 2:12 in the 800m, and just missing the podium at the Indiana State Finals. The near miss of the podium was gut wrenching and became my greatest motivation during my final year before college. Every day I hit the track to push myself harder and harder, following a training program I had written with only one goal in mind. I was going to race the 1600m at the Indiana State Final and win. I dreamt of being an Olympian but without a podium finish at the state finals I was likely too slow to
even run competitively in college. I made the resolution that I would give everything I had during this final year of high school and see how far my dreams would take me.

I became gritty and more determined than ever before in pursuit of my goal. I ended my senior year in 2016 undefeated in the 1600m, running one of the 5 fastest times in Indiana state history in 4:48. I set 13 school records and increased my speed to 2:12 over 800m and 58.2 over 400m. I signed to run for Indiana University, and was one step closer.

As a collegiate runner at Indiana University I was a multiple time Big Ten podium finisher on the track, placed 32nd at the Big Ten Cross Country Championship, and had appearances at the NCAA D1 Cross Country meet. Yet I truly began to realize my potential following my career as a collegiate D1 track and cross-country athlete while talking to Joe Maloy about the USAT Collegiate Recruitment Program. He explained that I had a path to the next level. Triathlon would be my chance to make the Olympic team. I was getting back in the water, and my athletic journey was heading in a familiar direction, triathlon. For years, I cheered my mother on from the sidelines of triathlon race courses and now it’s my turn to take the plunge and speed off to the first buoy. Training under Jim Vance has helped me realize my potential and I am incredibly excited to join Team Psycho Elite Development for the journey.

My journey as a scholar athlete- an age group swimmer, to high school runner, to collegiate athlete and now Olympic hopeful has helped foster an interest in other aspects of performance. As a graduate student-athlete working in the field of psychology, I hope to one day utiize my talents from the classroom and the race course to further the athletic development of others.