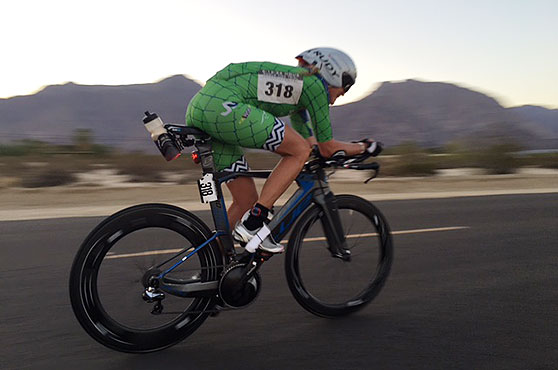 I don’t often write race reports. But this one seems worth.

Yesterday, I raced the 12 Hour Time Trial World Championships in Borrego Springs, CA. Borrego is a nothing of a town in the middle of the Anza-Borrego Desert. The drive from Palm Springs was sobering. No cell service, and roads from the Salton Sea westward were paved, yes….but barely.

There is not much to the town itself. In fact, Dave and I wondered for most of the 3 days we were there why anyone would live there, except for the fact that you could likely buy a house for $10,000.

Anyway, I’ll write a more complete blog when I’ve had time to digest. But here are some facts;

There were 3 divisions; 6-hour, 12-hour and 24-hour. The race is a qualifier for RAAM. I don’t know if I qualify for RAAM off the 12 hour, but honestly that was not my intent when I signed up. I signed up because I’ve spent the last 4 months playing a not-so-glorious game of injury whack-a-mole. Every time I got healthy and started to ramp up my running, some other niggle would creep up. My coach and I finally decided that rushing the run to return to racing in 2016 was not productive, so as of late September, I said sayonara to 2016 and focused on a healthier year in 2017.

Thru it all, however, I’d been able to bike. So my coach found this race and left it to me what division to race. Straight off, the 24-hour was out. I like my sleep too much. The 6 hour didn’t hold much intrigue for me because it was mostly just like any other long ride day, or Ironman. The 12-hour seemed…..just right. Enough out of my comfort zone to motivate, but not totally insane. So 12 hours it was.

I had hoped for a 10 hour ride, but with my levels of fatigue, we decided to scrap it. I’m glad. I’m not sure it would have been that useful.

So the race itself takes place around an 18 mile loop. They set the 24 hour racers off at 6PM. We went off at 6AM the following morning and the 12 hour racers started at 12 noon. I felt rather soft driving back to our hotel after the race meeting on Friday afternoon, seeing the 24 hour folks ready themselves. How could I complain about riding 12 hours when there were heaps of crazies lining up for 24 hours?

At 4:30 PM, they move everyone to the “short loop” (4.7 miles) and you continue on the short loop until 6PM, or until you come thru “the pit” (start/finish area) and don’t have enough time to complete another loop. For me, that was at about 5:53PM.

At the end of the day, I seem to have won. The entire 12 hour division. I chicked all the guys. A few got aggressive early, but I guess I reeled them back in during the day at some point.

My total mileage was 258. I was stopped in the pit for a total of 12 minutes all day for potty breaks and refueling (thank you DaveyG for standing in a parking lot in the desert for 12 hours to hand me food and drinks). And then there was the 7 or so minutes at the end where I wouldn’t have completed another loop. My total ride time was 11 hours, 41 minutes and change, so my average moving speed was on 22 mph.

I knew going in that nutrition would not go according to script. But I had lots of options; my traditional INFINIT nutrition drink mix, modified slightly for a longer race day. I had some Perpeteum, which tastes like poo, but was recommended to me because of the protein and it definitely cut the sweet of the INFINIT. I had gels, of which I ate one. I had something called Epic bars, which are essentially meat bars. They are rather nasty and I don’t recommend them, but they are a healthier form of beef jerkey and did the trick on the savory side to cut all the sweet from the drinks. I had loaded up on other essentials that had saved the day on training rides; sea salt and vinegar chips, red bull, coke, frosted blueberry pop tarts, peanut butter pretzels, swedish fish, snickers bites, gum, honey stinger waffles and we had pb&j just in case.

The first 5 hours went on script for nutrition but from hour 4 to 5, I had a bit of a low. The race was no longer new and exciting, and it was getting hot. Barney had advised to wait until after half way to start caffeine, and while I knew it was early, during my first potty break at 4:36, I asked for Red Bull. Dave tossed me a bottle and said “There are 2 in there” and off I went.

2? That might be a little much too soon, but over the next 30 minutes, I swigged it down and got a SOLID 3 really good hours out of it. I went back to regular nutrition, but just before 8 hours (and not surprisingly after an Epic bar) I barfed. So starting at 8 hours, I made the call. I switched to coke and never went back. My last 4 hours were fueled by coke and swedish fish.

Surprisingly, I was pretty happy all day. No highes. No lows. Someone taught me that one time.

We were allowed one ear bud for music which did save the day. I was belting out some songs in the later hours. Shockingly, I passed some others doing the same.

I’d type more, but my battery is dying. I’m sitting by a pool in Palm Springs, where I will be for the next 2 days.

For as much as an (unofficial (the course was not certified)) world record and world title are nice, my focus is still on triathlon. The RAAM ladies seemed happy to hear that.

More on a website blog, but first, a few margaritas!