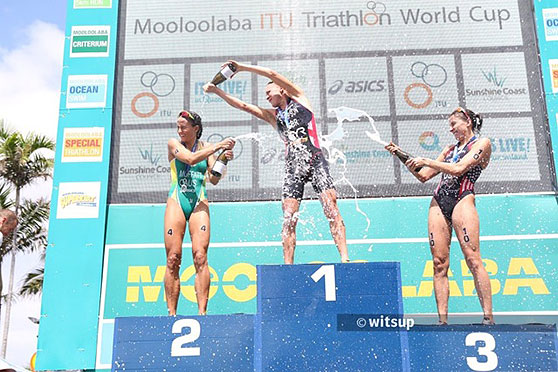 It’s my favorite time of the year! After a hard and long winter of training in Phoenix, AZ it is finally race season and time to put my fitness to the test. I made my season debut in Wollongong, Australia. I had the privilege to travel with Taylor Spivey, a fellow training partner. We got to Australia a week earlier than our coach and squad, so we were on our own to find housing and transportation around Wollongong. We found a retro 80s AirBnb that was about 5k from the race site, and we explored the town by bike! It was quite the adventure as we found some scenic bike routes with beautiful ocean views and thankfully Gwen Jorgenson was there to help suggest where to train.

The nerves leading into Wollongong were out of control as it had been 6 months since my last race at the WTS Grand Final in Chicago. Fortunately, once I started warming up the nerves subsided and I went into race mode and knew exactly what to do. The swim took place in the Wollongong harbor and had relatively calm waters until we reached the mouth of the bay. I was able to get out really well and had a solid swim exiting the water 3rd. Unfortunately, I had some mechanical issues on the bike that caused me to fall back and ride in the main chase pack. I came into T2 about 40 seconds back from the front pack of 8, I knew I would have to run hard from the start. After 2k I had caught the first few girls and with about 1k to go I knew it would be possible to catch 2nd place. In the final 200 meters I made my move to do so. Overall, I was happy with my start to the season taking 2nd to Gwen Jorgensen. The day after the race Taylor and I made our way to the Sunshine Coast to prepare for the Mooloolaba World Cup. 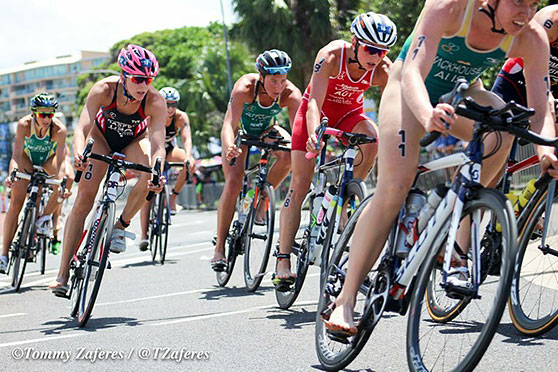 The conditions on race day were perfect and typical for the Sunshine Coast: hot and humid! The swim is always an exciting one in Mooloolaba, as the surf can add an extra element of excitement and variability to race conditions. Standing on the start line, I knew making the front swim pack was going to be crucial to have the outcome I was after. The horn went off and we were all sprinting into the water. Dealing with surf is still relatively new to me and a skill I have been practicing over the past year. Fortunately, thanks to great coaching, I was able to get past the waves and rounded the first buoy in 3rd. I held my position around the remaining buoys and was preparing to catch a wave back to shore. I could feel a wave pushing from behind me and I picked up my stroke rate and kicked hard. I rode the wave into shore and as I stood up I looked around me and I was the first one standing. In shock, I ran towards transition amazed that I had conquered the surf and was first out of the water for the first time in my career. 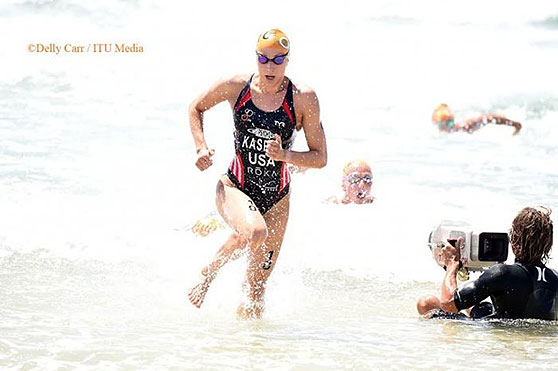 Having the little bit of extra time coming out of transition, I easily got my feet in my shoes and prepared for the girls behind me to come flying by on bike. The bike course was 4 laps with two decent hills on each lap and a technical portion through transition. A priority on the bike was staying hydrated and setting myself up well for the run. The run was 3 laps and included the same hill we had to bike up. I got out of transition with the front bike pack and found myself sitting in 4th. After the first hill, I moved myself into 3rd and found myself running with one other athlete fighting for the final podium position. I was able to make a surge on the final hill and put enough distance on 4th. I sprinted to the line not daring to look back. I was ecstatic to finish 3rd in a high quality field and to see a glimpse of the work I had put in over the winter months.

I am currently living and training in Geelong, Australia as I prepare for the next series of races which includes New Plymouth World Cup, Gold Coast WTS and Cape Town WTS. I had a lot of help and support over the winter months that allowed me to get to the start line in 2016 healthy and happy. Thank you USAT and Jarrod Evans for your continued support and coaching. I am grateful to have the opportunity to represent and to be supported by Team Psycho for another year. In addition, thank you ROKA, MPG, Oakley and Endurance Rehab for your support this 2016 season. Most importantly thank you to my family and friends for their unconditional love and support as I travel the world pursuing my dreams. 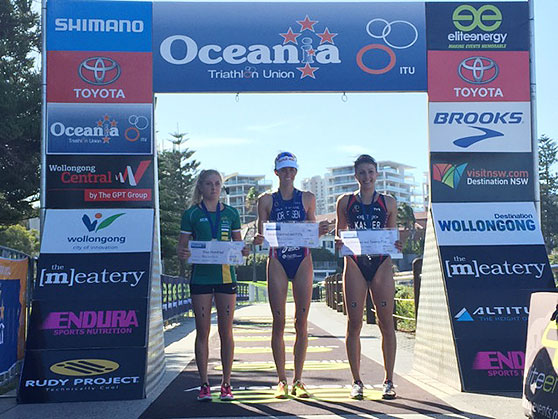