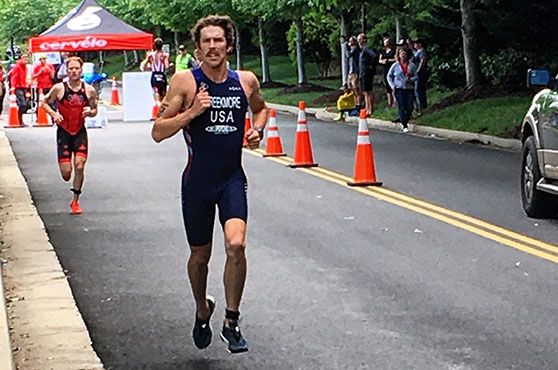 The lead up to racing makes me nervous. I don’t mind this though, because I know that being nervous is a sign from my mind and body that I understand the magnitude of the event to come. And nerves really are simply an embodiment of uncertainty which comes with every race. Richmond being my first ITU race, the pre-race nerves were plentiful, mostly because I didn’t really know fully what to expect at this level of racing. Coach Jarrod Evans makes me aware of the demands of competition daily during training, but as everyone knows, training and racing are not the same thing. In spite of the pre-race anxiety, I was excited. I had family that would be there to watch me race. Plus, I’ve spent time in Richmond and raced cross country there, so it was a familiar setting. From the time I got off the plane, I could feel the distinct east coast humidity in the wind and also caught the odor of the trees I was so used to smelling. All of this eased those nerves and helped me maintain composure and not succumb to nerves going into the race.

I’ve never raced a triathlon in the afternoon, but I quite liked it because I didn’t have to wake up before God in preparation for a sunrise start. I got out really hard in the swim to get clean water, leading the ensuing charge on my side of the start line, but the best swimmers in the field were on the other side of the start line. I knew I needed to be on their feet when we got to the bottleneck at about 300m. When we made it there, I hopped into third position and knew that was a good place to be catching a nice draft from the two in front of me. I stayed right there, seeing no benefit from the energy expenditure needed to pass them for the remainder of the swim. Exiting the swim still in third, I made my way efficiently through transition. 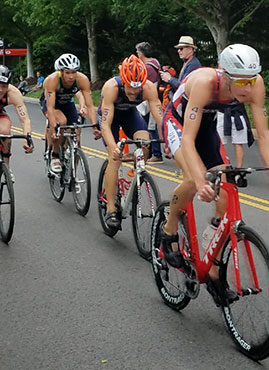 I hopped on my bike and two guys were up the road a little ways together. I simply didn’t get the jump out of transition I needed to get on the wheel of the Canadian who mounted his bike at the same time. I pursued those 3 for about a mile solo until I realized there was a group of about 6-7 guys charging hard behind me. I decided to get in my shoes and get ready to accelerate and grab a hold as they rolled by. I didn’t want to get dropped with my feet still out of my shoes after such a great swim. I hopped right into their group. They were riding hard and I hadn’t found my bike legs yet, so for almost 2 laps of the 4 lap bike I found myself riding hard to stay in the group even out of the wind. Slowly we were bringing back time on the 3 guys up the road. Eventually with about half of a lap to go, we caught them and entered transition as a group of about 12.

It took me about a half mile to gather my run legs and really hit my form. But in that time, I had lost some contact with running groups, so I found myself chasing others in front the whole time. Unfortunately, that hard bike riding zapped my legs; however, I had enough good running, which allowed me to maintain a 9th place finish. 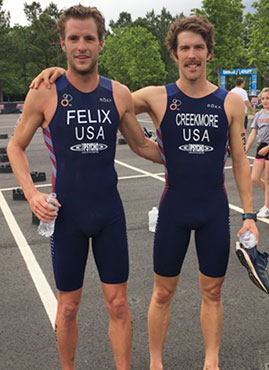 I’m content with a top 10 finish in my first ITU race and I’m happy with most of the execution of the race. After getting the first race out of the way, I now know what the demands of competition are that Jarrod talks about all the time. I can bring that knowledge and experience back to my training. I also know my weaknesses and areas of improvement that I can continue to work on. Now I’m heading back to southern California to embark on a run-focused block of training with a clear, race-derived focus before heading to Taizhou, China on June 3rd for an Asian Cup. I am thankful for the support of the USA Triathlon Collegiate Recruitment Program, Team Psycho, and Pacific Health Labs, which help me make opportunities like this possible as well as help me to progress towards my goals every day.