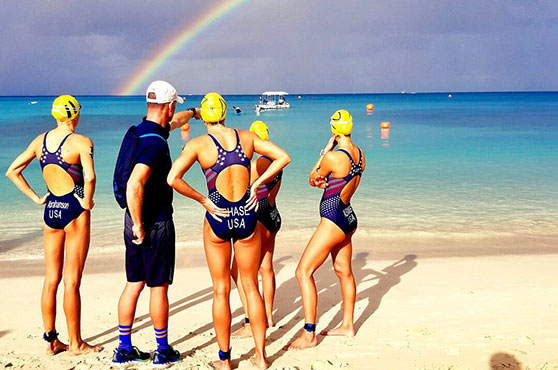 My journey as a triathlete first began last summer after I graduated from Stanford University. As a former collegiate runner with no triathlon experience, I had a lot to learn, but fortunately I ended up in the right place! I started in the Collegiate Recruitment Program (CRP) last summer and am currently training with two other CRP women under the helm of National Development Coach Jarrod Evans in San Diego. I couldn’t be more thankful to USA Triathlon, an organization that has gone above and beyond in supporting me as a developing triathlete!

When Coach Jarrod first informed the team that we would be competing at the Bridgetown CAMTRI Sprint Triathlon American Cup in Barbados, I was beyond excited. On top of being a great opportunity to compete, Barbados is also beautiful! Who wouldn’t want to race in paradise?

The first few days on the island were an adjustment! The international travel definitely took a lot out of me, which made rest, recovery and hydration that much more important. I focused on relaxing as much as possible and enjoying the company of my teammates.

Race day arrived with rain and wind, a major concern for the bike. Although the course wasn’t particularly technical, we knew the conditions would result in slick roads. Keeping my tires on the road would end up being half of the battle! Much to our surprise though, a magnificent rainbow stretched across the sky right before the start. A sign of things to come?

With that, the race got underway. I got a pretty solid start and quickly found myself among the front group of swimmers, including Canadian Dominika Jamnicky. I maintained my position around the first buoy. As we made our way over to the second buoy, Dominika jumped slightly ahead of me and I tucked in right behind her. I felt strong as we headed back to shore. 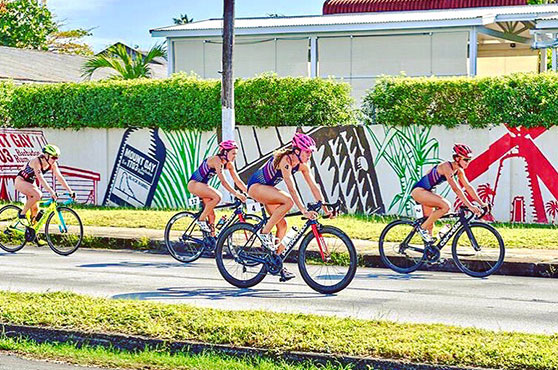 Although I was able to get out of T1 fast, I made the mistake of mounting my bike on the opposite side I normally do. It took coming to a standstill to get on. Although I was frustrated as I watched Dominika sprint away, I told myself to stay calm and make the most of the situation I was in. The wind was roaring as I started the first of five, 4k laps and I quickly realized I was expending a ton of energy biking by myself. A second group had formed behind me and I knew I would fare better with a couple more people to battle the conditions with. I jumped right onto the group as my teammates Mary Alex and Sarah as well as fellow American Megan raced by me.

Working as a group of four, we slowly started to put some ground on our fellow competitors. Impressively, Dominika maintained her lead out front. All was going well until the turn on the third lap when Mary Alex unfortunately fell. Megan, Sarah and I had little choice but to keep moving forward. Despite a couple more close calls, we stayed together and rode into T2 as a pack of three. Little did I know that another storm was brewing in the distance! 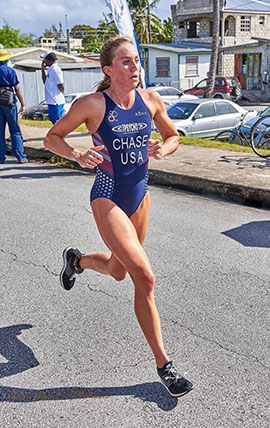 After a quick T2, I made my way out onto the road. I was feeling good and I slowly started to chip away at Dominika’s lead. Even so, she is an incredible athlete and hung tough. All was going well until we both reached an aid station that we believed functioned as the first turn on the two-lap course. The lead bike made this turn, and naturally we followed. It wasn’t until the second lap that I, and six other women, realized we had turned too early during the first lap. I remember panicking momentarily, but was able to calm myself and refocus. Praise God my teammates and I were able to finish strong despite the confusion.

The next couple hours after the race were a bit of a blur as the officials tried to figure out what had happened. Although I ended up winning the race and my teammate Mary Alex finished an impressive third after coming back from the bike fall, we didn’t know if the results would stand. I am so thankful for the care the officials put into coming up with as fair a solution as they could. Ultimately, they added 1 minute and 45 seconds to the time of each woman who had made the incorrect turn on the first lap of the run. This was the estimated amount of time for the 500m that we missed. Although the positions of top four finishers stood, the fifth and sixth place finishers changed. As grateful as I was for the result, I also felt badly (and still do a bit) about the whole situation. It was a tough and somewhat stressful end to a pretty grueling race, but I learned a lot as a result! 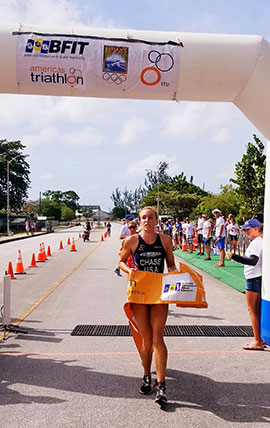 Certain things are learned best under stormy circumstances and, funny enough, my experience in Barbados was no exception. Wind, poor roads and some course confusion made for some challenging conditions in an otherwise idyllic, vacation-spot, but I am nonetheless grateful for them. Sometimes things don’t go exactly according to plan and learning how to respond positively to whatever situation I am dealt was a huge takeaway. I am excited to keep developing and thankful for all the support. I praise God for the strength, health and endurance He provides me with each day. I also wouldn’t be where I am today without the support and opportunities provided by USA Triathlon. I also owe a HUGE thank you to Team Psycho, whose financial support played a very tangible role in getting me to Barbados. I am humbled to be a part of the Team Psycho family. 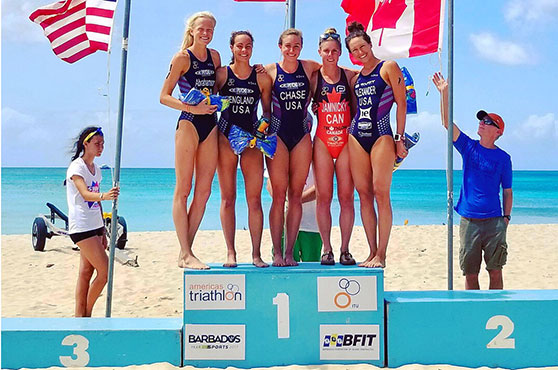