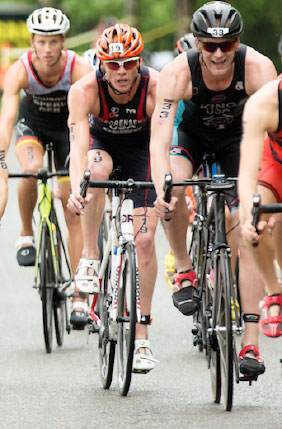 Pouring rain, booming thunder, white lightning… This is how I woke up the morning of my race in Richmond, Virginia. As the elements outside were battering the earth, I wanted to batter my competition. Conversely, as the earth withstood and outlasted the elements, I wanted to withstand and outlast my competition. I know, I know, I’m dramatic…. Maybe overly so, however it’s hard for me to not have these romantic thoughts with race day. Each race is a war and I train every day to be prepared for the chaos that ensues with the starting horn each race.

I’ve spent the last year and a half doing my best every day to transition from a nationally competitive runner to an internationally competitive triathlete. Each day waking up hopeful and each day crawling in to bed dejected. This sport is relentless, and it only rewards those who swim, bike, and run exceptionally well on race day. The point of racing ITU is to make it to the Olympics, and making it to the Olympics requires one earning points in ITU races. One earns points by finishing in the top portion of any given field, with the amount of points determined by the level of competition in the field. So, a race featuring 5 of the top 10 guys in the world will offer more points than one with 5 guys ranked 120th or worse. These races start with a swim, are followed by a draft-legal bike portion (think peloton in the Tour de France), and then finish with a run. Due to the nature of draft-legal bike racing, if one does not finish the swim with a group, the athlete is likely out of the race because one individual cannot outride a group that is drafting off of each other and working together.

In my first year of triathlon (2015), I raced six continental cups and never exited the swim with a group. I lacked both experience in open water swim racing and also, though my ego hates to admit it, the physical ability that most of my competitors had in the swim. I just wasn’t http://www.honeytraveler.com/pharmacy/ ready for the physicality and strength needed to finish the race in a group. I put in a ton of hard yards during the base period to our 2016 season and it has showed. Though I still don’t think that I’ve had a swim (in a race) that illustrated my fitness, I have exited every race that I’ve done so far this year with a pack of athletes that I can work with on the bike. Now, I’m not in the front pack, or often even the second pack, but I’m still in the mix. My best finish so far this season has been 4th in a continental cup in Cuba.

As for my race in Richmond, I came out of the swim in the third pack on the bike, we almost caught the chase pack, and I finished in 12th place with one of the fastest runs. It was good enough to get points and improve my world ranking to 307. We thought that this was a solid race for me. I still have yet to come off the bike with the leaders, but it will happen eventually. I just need to keep believing in the process and trying to make myself a little bit better every day. That includes showing up to the sessions and giving effort, but it also includes rolling out, stretching, massage, diet, adequate sleep, and other things that people often forget are a part of the equation.

Am I where I want to be? Absolutely not, but do I believe that I can get there? Yes. I will keep waking up hopeful and who knows, maybe one of these days I’ll find that I’ve achieved an important step on the road to Olympic qualification.

I have so much support – from my family, my coach Jarrod Evans, USA Triathlon’s high performance group, Team Psycho, and Satellite Logistics Group. What I do would not be possible without them. Every tough race I have, they are always still confident in me and what they know I will accomplish in time. I will never be able to thank these people enough!