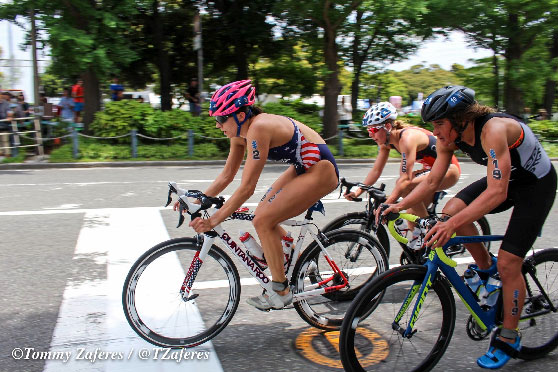 Emotions are high, body is tired and I am eager to get home. These are my thoughts as I fly home from Yokohama WTS. I toed the line in Yokohama in our final Olympic qualifying event on May 14 and gave it my all. My focus and heart has been dialed in to this race for many months of training and now that it is done there is a sense of relief, but also loss. I left Yokohama not achieving my goal, and that is never easy. The upside is that I know wholeheartedly that I did everything I could, and I executed every aspect of the race as instructed, so I left it all out on the course.

I would be lying if I said I was not disappointed I missed out on achieving a podium and therefore, I missed an automatic qualification for Rio. My race plan was to swim hard, bike smart to give myself a chance on the run. I wore number two, which was a first for me. I have never had such a low start number in a WTS race. I had full freedom of choosing my spot on the pontoon and I decided to go left. The water temp was 20.7 Celsius making it a non-wetsuit swim with choppy water on a very windy morning. The first buoy was 310 meters away, and I was determined to get out well. Unfortunately, I did not have an edge on the pack I anticipated, and we all came to the first buoy at the same time. It was an aggressive swim and I even got whacked in the head (and have a nice black eye to show for it). Swimming back to the pontoon on lap one, I knew I was farther back then I had hoped. I came out of the water at the halfway mark in 20th. Diving back In I was able to find some clear water and swam my way up the pack. Turning the final buoy I knew I was in ok position and had secured front pack. I came out of the water in 8th and acted with total desperation in transition. I managed to come out of transition in first, which gave me time to get my feet in shoes and control the pace.

The bike was 9 laps of 4.45km. The course was flat and consisted of lots of turns. There was not enough of a break between packs on the swim, so the packs managed to come together. A mistake I made in Cape Town, which I believe cost me a higher finish than 5th, was poor positioning coming into T2. This is an element of the race that is 100 percent in my control. I was going to give myself the best possible chance to execute, and I needed to come off the bike in the front. I paid close attention on the laps to see when the best chance was to move up, where it was hard to hold position, and what I thought would require me to do the least to get off the bike well. With about 2k left on the bike, I made my move to the front and told myself to hold it. I could see in peripheral vision that I had girls try to come up and pass me, but I only dug a little deeper to hold my spot. I dismounted the bike in second and had no traffic on my run to my spot in transition. I managed to have a solid http://www.mindanews.com/buy-inderal/ transition and started the run in second. 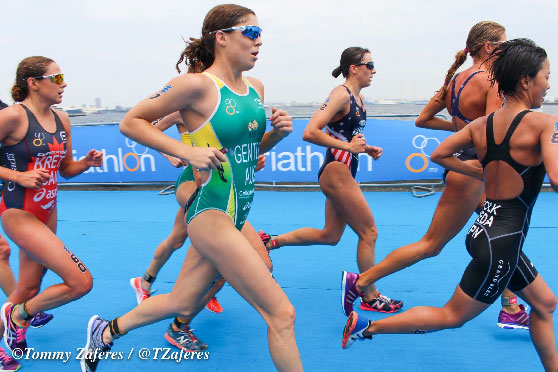 The run. This is where the blog gets tough for me to write. The pace was quick and I felt strong. I knew keeping contact was key as I needed a podium to secure my spot on the Olympic Team. Through 5k, my mindset was positive and I was in the pack fighting for second and third. The goal was in reach!!! On the third lap around the 180 turn there was a surge. I tried to surge to match it, but I wasn’t able to stay with the front girls and found myself now in 4th-8th place. I focused on my form and continued to fight. The default mindset was to remember that it is a WTS race, where points matter for the overall season. Every position counts, and I was to not give up no matter what. On the last lap, I fought hard all the way to the line, managing to finish ninth. I couldn’t have done anything else. I found my coach, Jarrod and gave him a hug and told him I gave it my all. I can sincerely say I am ok! I did what I could. Unfortunately, my all came up short, but I have no regrets or doubts in my execution. I leave Yokohama smiling for what the next 4 years will bring. I am so thankful to have had the opportunity to race in the Olympic Trials. Every time I toe the line I try to represent USA Triathlon to the best of my ability and make my family proud.

When Barb Lindquist recruited me to the CRP June 2014, Rio 2016 was the goal. To see the goal become an actual possibility and to be competitive at the Olympic trials was an amazing experience I could not have done without many special people. USA Triathlon invested a lot in my potential. USAT provided me with the coaches, the guidance, and the skills I needed to toe the line this past weekend at the Olympic Selection event. I am so thankful to be a part of an amazing federation and to be a triathlete. My coach, Jarrod Evans, promised to do everything he could to get me ready for Yokohama, and for that I am forever thankful. I am confident as a team that we did everything we could to be ready to race.

I started this journey because I had the support of my parents Barb and Bob Kasper and my sister Jenelle. The support grew and became a family affair. To have my extended family so invested in my journey brings a tear to my eye. It’s amazing what the power of family does.

Finally, my sponsors allow me to train and race at the highest levels. Thank you for your support Team Psycho, ROKA, Endurance Rehab, Oakley, Nuun, MPG and Bipro. It’s an honor to represent these brands.

So as I leave Japan, I have a new mindset and long term goal: to return to Japan in 2020 representing the USA at the Olympics. The fire and determination is there, I just have to be patient. My time will come, but until then I am excited to see where the next 4 years will take me.