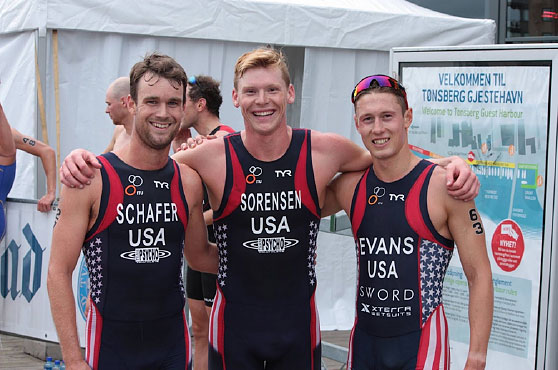 Most of the ITU races are centered on the European Continent in the summers, so we (the CRP crew) had the incredible opportunity to compete against high level fields in European cups. The men’s fields are always full (65-75 athletes starting the race) and I have found they offer the most competitive fields to be found in Continental Cups with phenomenal swimmers, strong cyclists, and an impressive caliber of runners. Last summer, I raced in three of these races and was always playing catch up after the swim. I was still in my first year of swimming and improving all the time, but found that I just had no chance to stay in the main pack coming out of the water.

The last race on our European tour this summer was in Tønsberg, the oldest city in Norway. Let me tell you something… Norway is pretty old. The Vikings that first found Norway landed in Tønsberg. So it’s basically like our Plymouth Rock, but 800 years older! Oh yeah, you read that correctly… I wrote 800. This city was founded in 871. This is difficult to fathom as our country is not even 250 years old. This historic city had everything which one would expect from a town center in Europe; beautiful town squares, outdoor seating at most restaurants, streets laid with cobblestones, and an accessible boardwalk along the waterway. The event organizers put on a phenomenal display of how to treat athletes by offering us a meal and free concert the evening before the race was held. In addition to that, they had the mayor of the city welcome us to the city. The city is located about 90 minutes (via train) southwest of Oslo, the capital.

The event was slated to be a sprint triathlon consisting of a 750 meter (~0.5 mile) swim, 20 kilometer (~12.5 miles), and a 5 kilometer (~3.1 miles) run. I was excited for the race as the week before I competed in a race with the same format in Sweden and had the best swim of my career. The swim is my least-strong discipline of triathlon and I have been putting in a lot of hard yards since I began this sport in late 2014. Once race day came, the organizers made the tough decision to cancel the swim portion of the race due to water quality concerns. Heavy rain the week of the race had significantly altered the condition of the harbor and they made the decision to change the race to a duathlon. This is a run-bike-run format and in our case, it turned out to be a 4.8 kilometer (3 mile) run, 20 kilometer bike, and 2.8 kilometer run (~ 1.75 miles). I was disappointed that the swim was canceled since I have been making progress, but I was also excited to try this new format or racing. I ran track and field and cross country at Georgetown University (go Hoyas!), so running is my strength. I knew this format would suit me and that I would have a solid chance of a good performance if I raced smartly.

The parcours was 2 hilly loops of running on the first leg, then 4 hilly and technical loops on the bike, culminating with 1 more hilly run circuit before heading to the finish line along the waterfront. Since I was ranked 12th, I started on the front line and decided that I would run as easily as possible while sitting on the leaders through the first run leg. The hilly course decimated the field over the second lap and they were only 6 of us entering the first transition. You can tell when your competitors are hurting more than you are and I felt confident as we started the bike portion of the race. No one wanted to ride hard throughout the cycling leg (including yours truly), so on the final lap about 30 competitors who had been working together caught us. At this point, I found myself further back than I would’ve liked and as I tried to move up a Danish athlete attacked. The roads narrowed as I chased and we headed uphill. I wasn’t able to get around a couple athletes until it was too late, as the roads were too narrow. Once the road widened, a large gap had formed and I desperately tried to make up as much time as possible on to the newly formed group of 15 at the front. I entered transition as the leaders were exiting and found myself in about 20th place heading out on to the run. I ran through as many people as I could and finished 5th with the third quickest run. It was an extremely challenging race, but I was thrilled to achieve my best ever result in a European Cup.

I had a great experience in Tønsberg and hope to return next year to race the triathlon! I am extremely fortunate to have the support of USA Triathlon in pursuit of my goal to qualify and race for a medal in the 2020 Olympics in Tokyo. In addition to USA Triathlon, Team Psycho and Satellite Logistics Group provide incredible support for me. I would also be remiss if I did not mention my family, who has always believed in me. They are thrilled that I am able to have the opportunity to compete and have a chance to live my dream of racing as a professional.